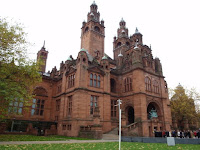 Yesterday I said we had been off the island for a week. We went down to my daughter's and saw my granddaughters. We also went three times to see my father-in-law, who has Alzheimers.
Anytime visitors go to Glasgow, they go to see the Kelvingrove Art Gallery and Museum and the Transport Museum. The Art Gallery had been closed for a couple of years, for renovation, so we wanted to see what they had done. Unfortunately there was a launching of a ship on the Clyde that day, and the museum was being used for the official council reception for the dignitaries. You can see some of them queuing to get in to the goodies! We were quite disappointed, but across the road is the Transport Museum, which is really interesting. My father-in-law was quite high up in Albion Motors, and a lot of the old cars manufactured by them are now in this museum. You can see some of the exhibits below. Yet again we were a bit unlucky. Glasgow Council are going to build a purpose-built museum of transport, so a lot of the exhibits, which we remembered, were not on display, and will not be seen again until the new museum is built. But just look at that little red mini! My husband and I did our courting in a car like that! Sigh!!
Till next time.
tich 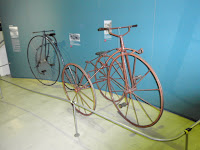 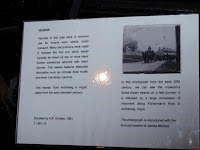 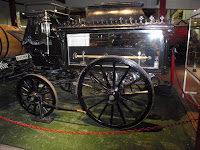 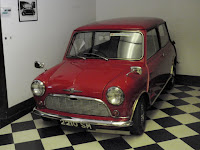 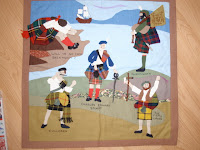 I have been off the island for a week, so have had no sewing done (except for a little embroidery on my granddaughter's school shirts!) I thought I had better post something, or you would think I was neglecting you - :-D
This is a small wall-hanging of the events that led up to the Battle of Culloden. I am not going to give you a history lesson on it (go here if you want to know about it), but I have always empathised with it, because the battle was fought on my birthday - 16th April, and I thought the reprisals were an outrage! It was the last battle fought on Scottish soil. I do not feel comfortable on the battlefield, just outside Inverness, and it is sad that no birdsong is heard there.
The wallhanging shows-
Top Right - The Raising of the Standard at Glenfinnan
Bottom Right - The Raising of the Clans
Bottom Left - The Battle of Culloden
Centre - Charles Edward Stuart
Top Left - The bereft Highlander left onshore, watching Charlie sail away, never to come back again. (Will ye no come back again?) Parts of the block are 3D.
I entered a block depicting the bereft Highlander into a Quilters' Newsletter Magazine competition many moons ago, and was one of the winners. My block was in part of the winners' quilt. 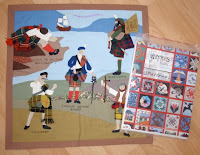 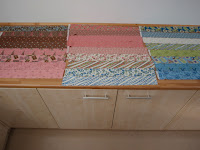 This is one of the jelly rolls that I bought a while ago. I kept on mulling over what design to use and was actually quite anxious about opening it up and actually cutting it! 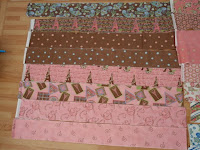 I was quite disappointed when I did open it up. The colours are just not me. The pinks are not my pink, and I do not like the blue materials. But this is good. It will get me out my comfort zone and make me work with materials, which are not quite me. 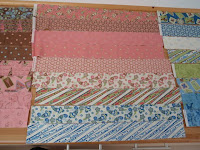 I intend to make something very quickly. It will certainly not be a masterpiece, and it will definitely not be as nice as I thought it would be. 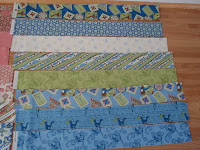 But it will make me use materials I would never have thought to put together, and perhaps it will turn out better than I think. I hope so!! (Sigh!) I intend to start it in a week's time. 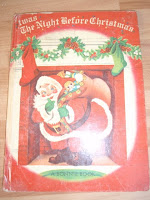 On a happier note, I found one of my favourite books of all time, unpacking a box last week (yes, I still have lots of boxes to unpack, after moving here two years ago!) -'Twas The Night Before Christmas'. I was given this book by my Mother for Christmas 1954, and to prove how much I loved it, scroll down to the next picture. 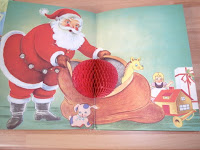 This is the centre page of the book, and the 3D tissue ball has no tears in it after 55 years.!
Till next time.
tich
Posted by tich at 11:48 2 comments: 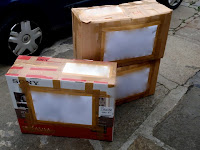 Yipee!! At last!! The teddies and the bags are finished!!! I packed up the last of the bags and these are the boxes, labeled and ready to go to the Mercy Ships headquarters in England. From there they will be sent on to the Mercy Ships in Africa. Lena is in Malawi, at the moment, on a school exchange. She should have taken the teddies with her.
We have had awful weather for the last few days, with high wind, rain and quite cold too. The weather changes really quickly here, so, just to cheer me up, I took this picture of the bay just beginning to fill, in between showers.
Enjoy!
tich 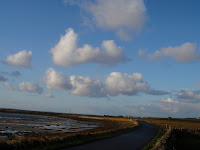 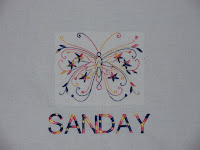 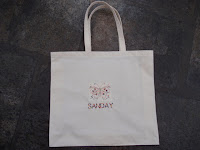 Yesterday I posted about a bag I had made for a friend for her birthday, and then realised I had forgotten to show the picture. I took the pattern from a calico bag, which my sister sent to me. I use it for carrying all my spinning equipment from house to house, and, as my friend is also a spinner, I thought I would make her a similar bag. It was also a good excuse to try out the embroidery module on my machine. She seemed pleased with it.
Posted by tich at 17:00 1 comment: 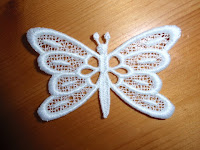 I have spoken before about my new machine, here, the Bernina 630E. I try to do something on Loopy Locket every day, but I must be honest and say that the most I have sewn on her has been to do with teddy bear bags. They are almost finished now, and all that has to be done, is to collect the last of the bags from Lena and get them parcelled up. I can then clean up my studio and call it my own. I made an embroidered bag (and the bag) for my friend's birthday, but I am still a bit anxious about the embroidery unit. (I went to put a link for the bag and realise I have not posted about it - duh!!) I thought I would try out a bit of lace. I know this is really elementary stuff for people who use embroidery machines, but I was so excited, that I had produced this butterfly. I used two layers of wash-away stabiliser, and it worked like a dream. Big pats for Loopy Locket, and big grins for me!
Posted by tich at 10:50 1 comment: 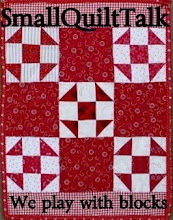